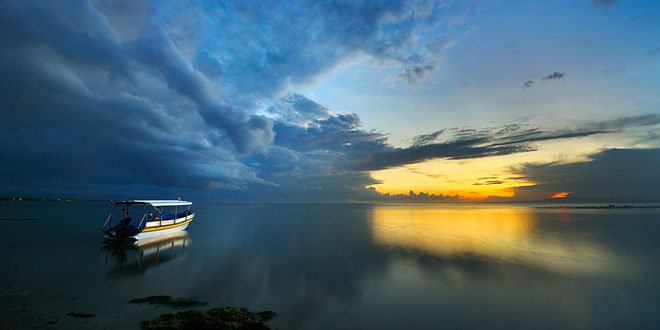 A couple of traditional wooden boats with colorful sails appear to enter Sanur’s coastal waters, brought in by their masters – fishermen by heritage – who are just coming home from sea. The scene of these jukung (the local name for these traditional boats) splitting the calm and clear waters and then landing on the exotic golden coast is easily embedded in the memories of anyone who has witnessed it, making the jukung one of the major icons of this ‘island of the gods’….

The Jukung
How the jukung came into being remains vague. However, it is certain that the jukung is foremost among the types of traditional vessels widely used in Bali (and also in the neighboring island of Lombok), generally used for fishing. The exoticism of these 10-meter long boats lies in their single multicolored sails.

Obviously their owners are indeed fond of decorating their boats. Also contributing to the exoticism are their outriggers. These beams are usually made of bamboo and function as stabilizers that prevent the jukung from capsizing, and are positioned parallel to the boat’s framework. That is why these types of boats are also referred to as double outriggers. Essentially of Balinese origin, the double outrigger jukung is but one of the many genres of Pacific/Asian outrigger canoes that use the lateen (triangular) sail.

In line with developments, nowadays fishermen equip their jukung with outboard engines that are used during the absence of wind to push the sail. Upon landing, you can note another unique characteristic from up close: the front part of the boat resembles the face of a fish; hence the whole boat will resemble a fish. Although the fishing jukung only operates out to several kilometers from the coastline, bad weather and other factors sometimes renders orientation difficult. The fishermen say that the eyes help in ‘guiding’ them through the points of the compass.

Spectacular Spectacles
If we move further north from Sanur, we can encounter the jukung again along the coast at Kusamba and further north again at Candidasa, where armadas of jukung can be found. The colorful sails out at sea easily catch the eye from the roadside, in contrast to the black volcanic sand. When they are at sail they add a spectacle to the scene. Usually the jukung all sail together until the seas are filled by the armada, flocking like birds on the calm sheen of the ocean.

Further to the north in the area of Amed the jukung armada becomes even more dominant. The morning seas somehow belong to them, as hundreds if not thousands of jukung decorate the sea there.

Behold the real spectacle. Stay overnight in this coastal area that is filled with options nowadays, and wake up before daybreak to witness it all. Not only will you take in the fresh morning sea breeze, but in the far eastern horizon you will also see a red ball of fire rising up in the crimson sky, emerging from the waves. Then faintly and gradually, around the rising sun, you will see hundreds or even thousands of these colorful sails. Eventually the sails become clearer, and in their numbers they somehow show as if they are having a race. Sails slightly fluttering and beams bobbing up and down, they leap up once in a while, signifying their high speed.

After several hours out at sea from the early morning, it’s time to go home. Starting as small dots on the horizon until their colors fill the sea, they are ready to land. Every jukung is part of an armada. Each armada has its own landing site. And every bay is filled with hundreds of jukung. We even noted a bay that had up to 500 jukung!

With their high nautical skills the fishermen start to maneuver their jukung towards their bay. Slowly they approach the coastline. Then how do they land so many boats at a single bay? Especially since each boat is manned by only one person. It seems impossible to land without the guidance or assistance of another. This is where their expertise comes into place, which is another spectacle to witness.

One by one the jukung await their turn to land. The timing of the wind cannot be predicted. Thus many of the jukung distance themselves several meters from the coast, and fellow fishermen who had reached land first must immediately lend a helping hand to the following jukung. As soon as the last wave washes ashore, the boat gets pushed inland and is greeted by 2-3 of their fellow fishermen.

“Come on… heave… one… two… three!”, and “Woosh…,” the waves toss the fishermen and the jukung as they pull in the wooden vessel. “Crackle, crackle, woosh…” is the sounds as the water dissipates through the stones and coral. A second later another wave arrives and the fishermen once again prepare to heave the jukung up in synchrony with it. “One… two… three… haa…!” little by little the boat is lifted further from the waterline and towards its parking space. Full spirits behind colorful sails….

The parking process for each jukung must be completed in the nick of time because the hundreds of others cannot wait too long… they are all near to the coastline. In the event of a bad synch, the jukung may capsize or even break with the wrong momentum of the tide. When a jukung is being drawn in, usually the others are already very close. So by the time one jukung has been successfully parked, there is another already prepared to be lifted, while another is readying to land, and others are still at sea.

Quite a beautifully hectic and dramatic scene. And surprisingly, this synchronicity of 15-20 minutes usually sees three quarters of the armada already parked neatly on the shore!

A Priceless Asset
Sights not found elsewhere. The jukung are usually used by fishermen in calm seas. You will seldom see one in the high seas or in the open Indian Ocean for instance. Its existence also follows the rhythm of its master – the fisherman. The sea as their source of living is virtually limitless. Yet their parking spaces are becoming scarcer. The coastline is becoming filled with various hotels and restaurants. Even some coastal village areas have shifted. But these outriggers are iconic to Bali – the real Bali… as depicted in those guidebooks in decades past. An exotic part of Bali, we hope, that would not soon become an exotic past.