Let’s take a look and give praise to the unique feminine figure of Balinese women, coinciding with the commemoration of the birthday of Indonesian national heroine Kartini on April 21.

Many cultural observers have considered Balinese culture as the perfect form of a social model, with every member of the community playing a significant part within the social structure, ever lively and at large engaging in community activities and constantly attending various ceremonies. Balinese women play a central and integral part in the scheme of things, and although their roles differ from the men, without them the whole system would not function.

From their early years of childhood, a young Balinese girl would be exposed and actively involved in how to prepare from the simplest to the most intricate flower offering, and present them in sequence at the family temple, with the simple rituals and prayers that would eventually be embraced throughout her lifetime and future family life. They pick up Balinese dance and traditional food preparation and how to proactively get involved in the grander view of community activities. In no time, once a girl reaches puberty, she is expected to be fit to handle the ‘tricks of the trade’.

The Balinese woman is in one way a symbol of the island’s beauty, but now she has also risen from the traditional cocoon and has reached out into other non-traditional roles. Over two decades ago, it would be quite hard to even encounter a female traditional musician, be it a gamelan player or a traditional shadow puppeteer or dalang. The cocoon mentioned is the notion that a Balinese woman is restricted to her housekeeping chores and the mothering role in a family, and that they would have little time to pursue different interests. But that all has changed through the advent of time, as much transformation has swept over the artistic world, with cultural exchanges taking place constantly between performing artists from all over the world. Women are now seen as viable creative forces, and female performing artists are now considered among the creative forces within the artistic world. Swasthi Bandem for instance, wife of former Head of the Denpasar Arts Institute (then STSI, now ISI) Made Bandem, had created a lineup of new and colorful Balinese dance creations or tari kreasi baru, such as Tari Cendrawasih among many others.

Women’s gamelan groups have become popular, showing that their skills can guarantee a good performance. The originally patriarchal culture of Bali somehow determines that women conform to expectations. But they have challenged this. Aside from her regular household duties, a Balinese woman will spend a great amount of time making temple offerings and in ritual activities, thus not having a lot of spare time to hit the mallet. But tackling the multitude of ritual obligations that take precedence over rehearsals, some women’s gamelan groups have succeeded.

Within a span of 25 years, from 1980 to the start of the millennium, there has been a significant change in the activity of the island’s performing arts especially in Denpasar. This change is noted by the increase in women’s roles. Women have been able to emerge and perform important roles in around 15 genres of Bali’s performing arts, especially those categorized as ‘entertainment’.

Besides this increase in quantity, the quality of their performances have also risen significantly, considerably higher in competitive stature between individuals and groups, making way to occasional competitions held at local or district levels. 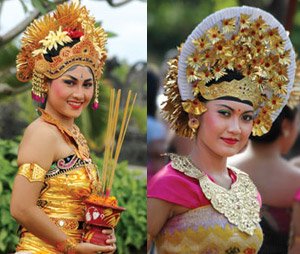 The various factors affecting this phenomenon include the sense of so-called equal rights in Bali, social change within the Balinese society, women’s awareness in getting involved with arts, the huge acceptance of society and the local government, the effects of tourism, the emergence of art schools and classes throughout the island, and the annual celebration of the Bali Arts Festival or ‘Pesta Kesenian Bali’ (PKB).

The Bali Arts Festival, a month long showcase of the island’s fine arts and artisans, which traditionally takes place around the months of June and July, is proof of what Balinese women are capable of amidst their traditional chores. This is due to the multitude of women artists who take part in the vast creations, old and new, of the island’s performing arts. The event is also the best opportunity for photographers and visitors from the world over, by which to witness the true beauty of the Balinese women in colorful traditional attire, in parade, and in live performance.

And for the current state of the female musicians and art troupes, they are also frequently seen in tourist venues, televised broadcasts, and at local temple festivals, therefore gaining affirmed acceptance and spreading the charisma of the all-able Balinese woman figure.

In the realm of traditional dance itself, there are many more dances performed by women that are owed to the beautiful images of Bali. Legong for instance, is the quintessence of femininity. It is one of Bali’s most exquisite dance forms, being over two centuries old, and was intended to be performed by prepubescent girls who symbolized divine celestial angels. Tightly bound in gold-leafed costumes, the girls performed in unison, the flowers at their headdresses quivering with every eloquent movement and shift of their shoulders.

In the realm of godesses and mythology, Balinese culture holds the goddess Dewi Sri (the goddess of rice and fertility) in special esteem, as Bali, originally an agrarian community, depends on its ability to harvest rice 3 or 4 times a year. In Balinese Hinduism, the trinity of Brahma (the creator), Wisnu (the preserver), and Shiva (the destroyer) also has other lower representations through their ’shakti’ or consorts, with Dewi Sri being one of them. Another extremely important female goddess is Dewi Danu (the goddess of the crater lake) from which Bali is supplied with water year round. At the temple of Pura Ulun Danu Batur, it is written “Because the Goddess makes the water flow, those who do not obey her may not possess (the result, the harvests) of her rice terraces”.

Traditional village life has had to accommodate tourism and Balinese women have had to adapt. In years past men could take more than one wife and a woman’s role would be to serve and be part of an extensive family. Polygamy is uncommon these days and with national law the consent of the first wife is ultimate. In the late 20th century, educational opportunities increased and interactions with Westerners presented some women with the chance of employment outside of the village.

Balinese men are constantly under pressure from their families to provide a son as an heir. With modern life comes financial stress, and the challenges of village duties and the effort of trying to balance a career with a ceremonial life all take a toll. But the Balinese woman moves on, taking on modern careers in every aspect of life thinkable: policewomen, hotelier, banker, notary and lawyer, teacher, etc. But somehow they have never and seemingly never will part from their traditional roots and duties­: raising children and being a source of love within the family, preparing daily offerings and rituals and tending to the communal duties of the village society.

Yet with all the constant challenges, the future ahead for the Balinese and the Balinese woman in particular is bright. Somehow the Balinese women manage to exhibit great perseverance and above all beauty and elegance in the face of even these most challenging times.