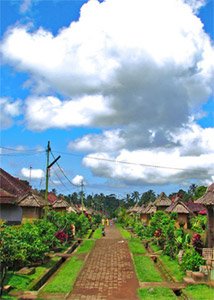 Penglipuran Village is a traditional countryside owning unique characteristic life, socializing and culture. It is located in Kubu Village , Bangli Sub district and Bangli Regency. The natural nature and environments of countryside is designating the pittance touch of modernization influence. This countryside is supported by cool atmosphere because it is located on the height land about 700 m above sea level and according to history of all old doyens that this countryside is taken away from the word Pengeling Pura what its meaning remember to ancestor, but there is also telling that the word of Penglipur mean the entertainer. It is said that at former empire era, all king often use this area as a place to amuse themselves, because its nature is beautiful and can give the peacefulness and inspiration at the time of experiencing a problem. This village can be reached through roads connecting district of Bangli with Kintamani. From Bangli town to the north up to Kubu village about 5 kilometers, then have turn left, one will arrive at Penglipuranand will be received with warm welcome by the villagers.

What to See at Penglipuran Village
Penglipuran Village, Place of interest in BaliThe houses exist in this countryside from north to the south is look very beautiful in particular the Balinese traditional entrance gate which are made similar each other. When we step down to this village, we will meet the Balinese houses are oriented northeastwards to Mount Agung which is located in north-east of Bali Island . The structure of house building between one house and others are equal in particular to condition, form, size and function from the building except building of family bed room is freeform. The family temple building is places the same direction to the Agung Mount, kitchen is located in upstate from the lawn and the building of Bale Sakaenem is the six beamed building which its function for ceremony place. The place for look after the livestock and the place to plant assorted vegetable are referred as non irrigated dry field which is called Teba. Its Construction material is made from wood except family residence. It is predominated by substance from bamboo because around this countryside is bamboo producer.

Social Life System
The countryside is lead by a leader which is Bendesa or Kelian or Penyarikan or Patengan and he/she is assisted by Sinoman. The social system is recognized by the 12 group terms that are number 1 until 12 as member of Pemerincik that is commissioned member converse the problem or plan and its result is submitted to the member. They are very trusting of 12 groups and have represented the tradition in heritage away back. The Consanguinity System in this countryside is Patrilinial system that is according to father lineage. This countryside religion leader is called as Jero Bayan which is consisted of 3 Jero Bayans that is a Jero Bayan Mucuk and 2 people of Jero Bayan Nyoman. The specific cultural potential like pattern of building architecture remains to be traditional, the beautiful nature and environment with cool atmosphere, hence this countryside is the ideal place to visit during your vacation in Bali.